The Saints have marched in, in the most dramatic fashion, on finals day of the Top 4 First XV champs in Palmerston North on Sunday.

St Peter’s were the big winners, both the Cambridge and Auckland versions of the school.

Inspired by deputy head boy, No 8 and skipper Niko Jones, son of the great Sir Michael Jones, St Peter’s scored no less than five tries in a heady 17-minute period which knocked Napier BHS’ end in after the Hurricanes champions had dominated the opening exchanges.

But St Peter’s raised hope with a try to centre Apetone Vaka on the stroke of halftime. That was set up by Jones, who also set up two others and scored an extraordinary solo try from 60m out. Chris Halaufia’s try, started from 95m out, was quite possible a late candidate for try of the year.

While Napier BHS fought gamely to haul itself back into the game, St Peter’s played it smart tactically to take not only its first Top 4 crown since 2000, but also the coveted Moascar Cup, which Napier BHS had wrested off Christchurch BHS just 48 hours earlier.

Jones was voted Top 4 MVP, while Kiriana Nolan of Hamilton GHS clinched the girls’ MVP prize for her sterling work, which included a 40m try, in her First XV’s 42-7 win over a committed, but outgunned, Manukura in the girls’ final.

Runner-up in 2017, but the queen of the Condor Sevens, Hamilton GHS showed its well-drilled qualities, led by a brace to young prop Vici Rose-Green.

In the co-ed final, St Peter’s of Cambridge defended its 2017 title, but had to work hard to subdue a committed and tenacious Rangiora HS 33-26 in the final. A Cam Roigard double and some slick handling saw St Peter’s take a 26-7 lead to the break. But Rangiora roared back into the contest, led by hard-running No and captain Angus Fletcher. It needed a late try to St Peter’s No 8 Andrew Viane, his second, for the Cambridge First XV to break the deadlock for the win.

Friday’s semifinals action saw the powerful wind as a decisive factor. St Peter’s of Auckland, again led strongly by Jones, edged Chiefs and Super 8 champs Hamilton BHS 8-7, while Napier BHS was too good, to the tune of 31-12, for South Island champions Christchurch BHS. 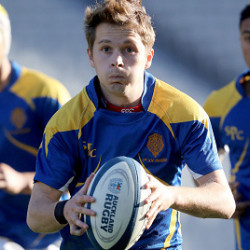 Campbell Burnes has written on rugby since 2000 for a wide variety of publications, both in print and online, whilst also contributing to television and radio shows. His major gigs have seen him at Rugby News magazine (2005-12), in which he covered 50 Test matches, and the New Zealand Herald (2014-17). Burnes is one of the few in rugby media to have played international rugby, having appeared for Manu Samoa in 1995 and 2000 (seven games) as a No 10