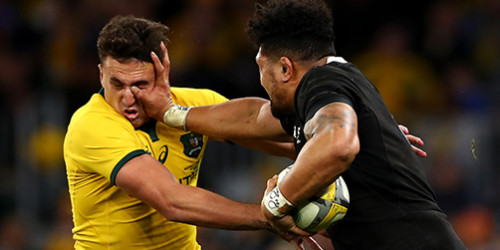 The All Blacks will head to Eden Park for the Bledisloe Cup decider knowing that most of their problems are reasonably straightforward to fix.

Hold on to the ball for starters.

Far too often in the loss to Australia in Perth they lost the ball in the tackle or through passes that shouldn’t have been thrown, or should have been held - and were by men wearing gold.

QUICK TAP: ALL BLACKS ROCKED BY COMMITTED WALLABIES
Improve the discipline. Scott Barrett’s red card is the glaring example of this but the All Blacks conceded eight penalties to Australia’s four and three of those were converted into nine points.

And make your tackles. The All Blacks missed a staggering 37 tackles. You don’t win Tests with that sort of defence.

It all conspired to give the Wallabies 65 percent of the ball by the end of the match - with the figure much higher during a first half dominated by the hosts.

The good news, perhaps, for the All Blacks is that given how stacked the stats were against them they still stayed relatively in touch with the Wallabies.

That it didn’t was a reflection of the All Blacks ability to conjure up a few tries, but it was still a lopsided scoreboard with Australia clearly the better team on the night.

Compounding the All Blacks misery is that they now have a serious problem at lock.

Barrett, whose red card came because he hit Wallabies skipper Michael Hooper with a shoulder, and with force, could yet be suspended by the judiciary.

With Brodie Retallick already out injured, Patrick Tuipulotu is the logical choice to start but who will come on to the bench?

Coach Steve Hansen will also need to have a decent think about starting Beauden Barrett at fullback again. Not because Barrett isn’t good there, he is, but Ben Smith seems wasted on the wing.

A back three of Smith, Reiko Ioane and Sevu Reece could give Australia more to worry about at Eden Park and having either Barrett or Richie Mo’unga on the bench adds to the impact late in the match.

The loose forwards were impressive in a losing battle with Ardie Savea making 14 tackles, Sam Cane, who only played 50 minutes making 13 and Kieran Read 21 (though he also missed six). Savea carried the ball 10 times for 76 metres. Not a bad night.
But the All Blacks defence in general play was poor by their lofty standards.

Before this Test they had conceded just a try a piece against Argentina and South Africa. In Perth Australia crossed for six tries.

??? "The guys are going to be hurting from this" - Kieran Read dissects the loss to Australia and looks forward to next week's Eden Park decider.

Reece Hodge had a great night on the right wing and Samu Kerevi was impressive in the midfield.

Nic White was also a handful at halfback behind a Wallabies pack that was impressive in the first half and obviously got better as the depleted All Blacks pack in the second.

But at times the Wallabies flattered to deceive as the All Blacks were the masters of their own misery, especially on defence.

Some of that is fixed by holding on to the ball and some will be fixed by a shift in attitude that will definitely come after this hefty defeat.

It will need to.

The Bledisloe Cup is now firmly only the line with a draw or another loss sending it back across the Tasman for the first time since 2003.

And with just one more game, against Tonga, before the World Cup, this match at Eden Park takes on even greater importance.

The All Blacks flew into Perth wanting a cohesive performance and a good win to ease concerns, boost Kiwi morale and remind the rugby world they are a force to be reckoned with.

That is now needed more than ever.

Congratulations Australia, you were the better team tonight. We look forward to the rematch at Eden Park next week.#AUSvNZL #BACKBLACK ?????? pic.twitter.com/NsXcFqORew— All Blacks (@AllBlacks) August 10, 2019