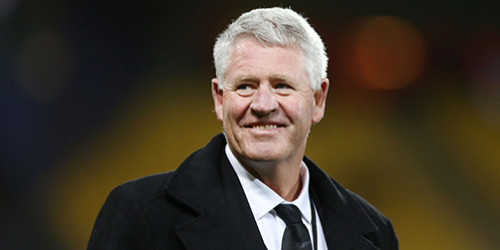 New Zealand Rugby (NZR) Chief Executive Steve Tew has today announced he will stand down from his role at the end of this year.

His departure will bring the curtain down on a 25-year long career in rugby administration, including the last 12 years as NZR CEO.  Tew has worked at New Zealand Rugby since 2001 and will leave in December.

"After much reflection, I've decided that this is the best time for me to make way for someone else to lead New Zealand Rugby into the future and a new phase for our national game" Tew said.

"There are new and exciting changes coming as a result of the upcoming, new international calendar; a changing broadcast environment; as well as a new All Blacks Head Coach to be appointed; so it’s the right time for me. “I’ve always been a great advocate for challenging convention and keeping New Zealand Rugby fresh and invigorated, whilst always encouraging our people to grow and extend themselves. I believe the time is right for someone else to lead the organisation.
“It has been a great privilege to hold this position and I’m grateful for every day that I have experienced. My wife, Michele, and I have been talking for some time about the best time for us to move on to some new challenges. Our Chair Brent Impey and I also discussed when the best time would be to introduce some new blood and new leadership, to keep New Zealand Rugby at the top of our game.
“I’ve not made this decision lightly – it’s a job I love and I consider it an absolute privilege – but it is for those reasons, that I believe the time is right to step down.
“I am immensely grateful to the Board for their ongoing support. I also want to pay particular thanks to New Zealand Rugby’s staff.  They are an incredibly hard-working, passionate group of people and it has been an absolute pleasure and privilege leading them.
“I also want to acknowledge the huge number of people from our commercial partners, Provincial Unions, Investec Super Clubs and other rugby organisations, our players, World Rugby and other international unions, for their support and friendship.
“I’ve made many lifelong friends through this game and it is comforting to know that so many, very good people are committed to rugby and making it a truly great, global game for all.
“I have been very fortunate to have worked with incredibly special leaders of the Board, including the late Jock Hobbs, Mike Eagle and Brent, and countless colleagues here at New Zealand Rugby.
“My greatest gratitude and thanks go to my wife Michele and our daughters, Ruby Maddy and Lily, and extended family and friends. It goes without saying that their support and love have allowed me to give my best to this role.
“I’m excited to be looking at new opportunities, and I hope to still be able to contribute to rugby in some way.
“But for now, this year’s priorities will be the Rugby World Cup in Japan, confirmation of our competition structures, completion of the sale of our broadcast content and to ensure a smooth transition for my replacement.  Then it will be time to leave and share some time and a Classic or two with my family and friends.
NZR Chairman Brent Impey paid tribute to Steve Tew, describing him as “one of the most influential figures in international rugby”.
“He has enhanced New Zealand's reputation on the world stage, overseen incredible successes from our teams in black over the years and also led a team that has significantly grown the global profiles of those teams.
“I think it says a lot about Steve’s character that while we both consider he still has much to contribute to the organisation, and in fact World Rugby, he has taken an unselfish look at what is best for the game in New Zealand.
“Under Steve’s stewardship, New Zealand Rugby holds all four Rugby World Cups for both men’s and women’s Fifteens and Sevens teams, which is a remarkable achievement.
“Steve and I have worked closely over these last five years in our respective roles as Chair and Chief Executive. I have enormous respect for his leadership, vision, philosophy and people management.

??? "The main prize is the Rugby World Cup and followed very closely by the Bledisloe, so we've just got to use the games that we've got wisely" - Steve Hansen gives an indication of what to expect this season.

“He is, without doubt, an outstanding Chief Executive for New Zealand Rugby. He combines many skills including a passion for the game, respected leadership throughout the world, and driving the organisation to over-achieve in many respects.
“While our teams have excelled on the field, Steve has led the way, off it, including advocating for greater respect and inclusion, the introduction of The Rugby Way, and the substantial increase in revenue during his tenure, which was more than double.
“He has overseen the negotiation of many of our major commercial deals which underpin the funding of the game in New Zealand and has the respect of all our stakeholders, whether they are commercial partners, governments or within the rugby community in New Zealand and around the world.
“He will have an ongoing role as a director of Rugby World Cup, and we expect to see him involved with the development of rugby in our Asia-Pacific and North America regions.
“With the international rugby landscape set to change, the recruitment process for a new Head Coach of the All Blacks underway, two teams preparing for Olympic Games, and preparation for New Zealand to host the Women’s Rugby World Cup, it is an exciting time for New Zealand Rugby.
“We will immediately begin our search for a new Chief Executive, and Steve has kindly agreed to stay on until a replacement has been found and settled in.
“I want to thank Steve for his extraordinary leadership of rugby both in New Zealand and on the international stage.  My hope is that his skills will not be lost to rugby altogether,” Impey said.
All Blacks Head Coach Steve Hansen said: “Firstly, I’d like to acknowledge what a fantastic contribution ‘Tewy’ has made to the game of rugby in New Zealand and globally, first with Canterbury and the Crusaders, and latterly with New Zealand Rugby and World Rugby.
“I don’t think there has been a better sporting CEO in New Zealand sport, especially given the immense scrutiny and expectation he had in his role at New Zealand Rugby.
“On behalf of the All Blacks, I’d like to thank him for his unwavering support for the team and management.  It’s no coincidence that his time in the job has coincided with one of the most successful periods of All Blacks rugby.  He’ll be sadly missed by the entire team, who have always enjoyed his company, support and passion.
“Personally, I’d like to thank him for all the support and wisdom he has given me throughout a very long association.  He gave me my first job as director of the Canterbury Rugby Academy and then various coaching roles following on from that.  But he’s been much more than just a great boss – he’s been a very supportive friend – and I’m immensely proud to call him a mate. “Finally, I’d like to wish Steve, Michele and their girls all the very best for the future.  When it’s all over, I look forward to sharing a quiet beer or two and reflecting on all the wonderful achievements in his career.”
Steve Tew – brief bio
Steve Tew was appointed Chief Executive of New Zealand Rugby in 2008, having been with the organisation since 2001.
He now oversees a $180 million business with a record on and off the field that is the envy of many sporting organisations around the world. During that time the All Blacks, Black Ferns and other teams in black have won multiple World Cups, held number one ranked team status in the world for record tenures and often held all the trophies they contest.
Prior to joining New Zealand Rugby, Steve Tew was Chief Executive Officer of one of New Zealand’s other most successful sporting organisations, Canterbury Rugby Union and the Crusaders Franchise (1996 – 2001). He was also previously General Manager at the then Hillary Commission and Secretary-General of the New Zealand Sports Union.
Steve grew up in the Hutt Valley, played for Hutt Valley High School and senior rugby for Hutt Old Boys before captaining the University club. He holds a Master’s degree in Sports Management from Victoria University. 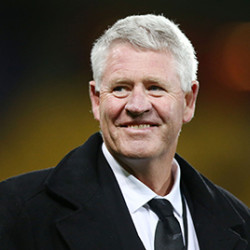