Steve Hansen says there always needs to be room for a bolter in a World Cup and Crusaders utility Braydon Ennor looms as a serious contender.

And while Ngani Laumape is already an All Black, having played 10 tests and started five, he is another who is threatening the established order.

QUICK TAP: FIVE TALKING POINTS FROM SUPER RUGBY ROUND FOUR
In 2015 Nehe Milner-Skudder made his test debut in August and was a star for the All Blacks at the World Cup a month later.

Ennor, who has played wing and centre for the unbeaten Crusaders in the first four rounds of Super Rugby, could do the same.

Versatility is important in a squad of 31 and Ennor is adept in the midfield, wing and fullback but it’s his pace, rugby nous and good defence that truly sets him apart.

He was very impressive in the first round against the Blues where he out played Ma’a Nonu at centre and he’s been equally good on the wing.

Rieko Ioane has the left wing spot all to himself as his four tries in the Blues win against the Sunwolves showed, but the right wing is wide open.

Smith will always be in the back three so the challenge for a prospective right wing is to play so well that Hansen has to start Smith at fullback.

Smith’s played well for the Highlanders but the form fullback is the Crusaders’ Will Jordan with Chase Tiatia also impressive for the Hurricanes.

Picking a form XV after four rounds means few All Blacks will feature as many have missed the first few games due to their compulsory stand downs.

ROUND 5? | It's going to be another MASSIVE round of #SuperRugby, who will win this week?#RaiseTheStakes pic.twitter.com/lYoG1xG5Sk— Super Rugby (@SuperRugbyNZ) March 10, 2019

It means the likes of Kieran Read and Sam Whitelock aren’t considered and that Codie Taylor, while superb off the bench in his first game back, misses out to Dane Coles at hooker.

Of the truly established All Blacks, Coles, Joe Moody, Owen Franks and Aaron Smith make the starting XV though it was a toss of the coin between Smith and TJ Perenara at halfback.

Scott Barrett is also there at lock and Jack Goodhue, who is certain to become an established All Blacks gets in a centre.

Richie Mo’unga nudges Beauden Barrett out at first five helped by being in the rampant Crusaders and he’s also had more game time.

Of the others, Shannon Frizzell and Jackson Hemopo have played well for the Highlanders and offer size, power, speed and versatility, and if Ardie Savea is named at No8, rather than openside, then it leaves a gap for a new flanker.

Billy Harmon had a huge game for the Crusaders against the Chiefs and Matt Todd is as reliable as gridlocked Auckland traffic, but I’ve enjoyed watching Du Plessis Kirfi play for the Hurricanes.

If Savea went to openside, Whetu Douglas has impressed at No8 for the Crusaders in Read’s absence and Akira Ioane has been much better for the Blues.

Along with Ennor, the most consistently impressive player in New Zealand’s Super Rugby teams has to be Laumape.

The Hurricanes second five is the competition’s joint leading try scorer with five tries, tops the defenders beaten with 17 and his 44 carries is second to Akira Ioane's 51.

Laumape suffers a bit from the same public blinkers that afflicted Ma’a Nonu early in his stellar career.

Because they run hard and fast, and can smash people on defence, some think that’s all they have.

Admittedly it took a while for Nonu to truly develop his kicking game but he was always a good passer.

Laumape showed in the win against Japan last year a deft cut out pass that put Coles in a for a try, and his chip kicks created a try from himself and for George Bridge.

Ryan Crotty and Sonny Bill Williams are probably rated ahead of Laumape by Hansen and his fellow selectors, but if the Hurricanes second five can carry his early form through the season, that pecking order is under threat.

*tough call on TJ Perenara, but only one can start! 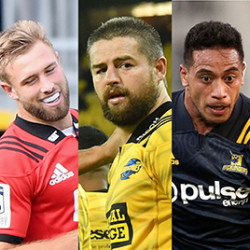