Sonny Bill Williams has to be at the World Cup and he needs to come off the bench for the All Blacks in the big games.

In a cluttered midfield where Ma’a Nonu is making a strong run to be picked in his fourth World Cup, Williams must be one of the first two names the selectors write down when choosing their midfielders, alongside Jack Goodhue.

QUICK TAP: SUPER RUGBY REVIEW - ROUND EIGHT
His impact late in matches can be immense and with rugby now a fully fledged 23-man game, his role has huge importance.

The Blues have, perhaps rather unwittingly, shown how games can be won late with props Karl Tu’inukuafe and Ofa Tu’ungafasi following Williams off the bench with great impact.

His misdeeds apparently include being a disruptive influence, a comment no teammate or coach has ever said of him, in fact, it’s quite the reverse.

‘What’s he done?’ is a question his detractors like to hurl.
When it’s noted he has won two World Cups, the counter claim is that it’s a team game, he didn’t win them by himself.

That’s true, but such comments are never used to belittle the achievements of Dan Carter or Richie McCaw.

What his critics won’t accept is that off the field Williams is a popular teammate, hugely respected for his professionalism, and who is generous with support and advice to others.

?? It's a @rugbyworldcup year and someone is keeping a close eye on the action. Are you picking any @AllBlacks bolters from #SuperRugby this year? pic.twitter.com/Dnhk48aDq1— Super Rugby (@SuperRugbyNZ) April 6, 2019

On the field his unique passing and ability to hit the line hard and with speed make him an incredibly difficult player to stop and his usefulness against tiring defences is massive.

He doesn’t make my Form XV after eight rounds but he’d be the first person picked for the bench.

Nonu has been superb for the Blues at second five and if he keeps it up, could be a genuine contender to go to Japan.

But Ryan Crotty has been equally impressive. Against the Hurricanes he orchestrated a “straight up” defence (as opposed to a drift defence) that saw him suffocate Ngani Laumape and with that snuff out the Hurricanes attack.

His passing skills have also been to the fore as the Crusaders have maintained their stranglehold at the top of the table.

Crotty’s only issue is his head. He’s had so many concussions that staying “symptom free” will be the key to him getting to Japan.

Elsewhere, Ardie Savea has shown he is the best loose forward in New Zealand at the moment, and the tussle for blindside flanker and right wing remains wide open.

Ben Smith has played 30 tests at fullback and the same amount on the wing so Steve Hansen could well start him there and use Damian McKenzie at fullback.

But on form, Will Jordan and Braydon Ennor have been impressive in the number fourteen jersey.

Tom Robinson has stood out on the blindside for the Blues - and not just because of his mop of red hair. He is big, strong, fast and skillful - and if he can carry his good form through the competition he may well be a surprise inclusion for the World Cup.

It’s unlikely though as Hansen has better known options like Shannon Frizell, Vaea Fifita and, if he gets fit in time, Liam Squire.

There is talk of Scott Barrett starting at six but I always get nervous at World Cup time when coaches move players away from their specialist positions.

Remember the shifting of fullbacks to centre in 1999, 2003 and 2007?
Barrett is a world class lock who can cover six. Let’s leave it like that.
Kieran Read’s return is welcome and he has already shown flashes of his old self but for now, Akira Ioane and Luke Whitelock have been the form No.8s.

Ioane has reduced the number of silly scuffles he gets involved in, and is instead playing with increasing consistency and cutting down on his errors.

He has X-factor and can break a game open. He makes the Form XV but like Williams, he could be a game change for the All Blacks off the bench.

ROUND 9? | #SuperRugby kicks off this week with a southern derby in Christchurch followed by a massive clash in Hamilton between @ChiefsRugby and the @BluesRugbyTeam?. What are your picks for this week? ??#RaiseTheStakes pic.twitter.com/ftLvKSboh3— Super Rugby (@SuperRugbyNZ) April 7, 2019 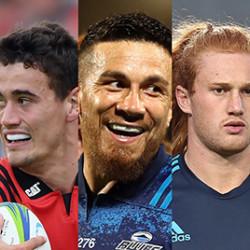