It’s a rhetorical question but seriously, what more can Brad Weber do to convince the All Blacks selectors he’s worth another shot.

Weber has played one Test, off the bench against Samoa in Apia, a game organised to help fine tune the All Blacks ahead of the 2015 World Cup.

QUICK TAP: ALL BLACKS SELECTORS KEEPING OPTIONS OPEN
He was there largely because Tawera Kerr Barlow was still working his back from a horrific leg injury.

Four years on and his case for a recall is as convincing as it will ever be.
Weber has been simply outstanding for the Chiefs with his leadership, passing, running and support play as good as it gets - well, unless you’re Aaron Smith or TJ Perenara.

Even then he’s not far off the pace and it’s an intriguing by-play to the All Blacks selections that he is starting ahead of last year’s third halfback Te Toiroa Tahuriorangi.

All Blacks coach Steve Hansen reminded me recently that it was the same last year and that Tahuriorangi plays a different role for the All Blacks to what Weber does for the Chiefs.

It’s something Jeff Wilson noted too when he told me on Radio Sport the All Blacks coaches clearly like what Tahuriorangi brings as their third halfback.

“Tahuriorangi actually played very well for the Chiefs on the weekend when he came on, he played a few more minutes and you could see what it is that the All Blacks coaches like about him.

“And that’s the hard one (for Weber) because they’ve had the guy in their environment, they know what he can do, they like what he can do and he has all the characteristic of an Aaron Smith-type halfback.”

But Wilson acknowledged there had to be recognition that Weber is in the best form of his life.

He must be higher up the pecking order than Mitchell Drummond who came off the bench against a French XV in Lyon and Japan in Tokyo last year.

And he must be a decent way ahead of the Blues’ Augustine Pulu who was used twice by Hansen in 2014.

The difficulty for Weber is that Hansen only needs a backup halfback, someone who might be used against either Canada or Namibia to give his top two a rest, and even then, it could be off the bench.

In 2015 Perenara was used off the bench in the opening match against Argentina and started against Namibia but it was Smith who was the constant at halfback with Kerr Barlow off the bench as he found his fitness.

There was a more even share of the load in 2011 but that’s because there was little between Piri Weepu, Andy Ellis and Jimmy Cowan.

That’s not the case now with a sizeable gap between the top two - Smith and Perenara - and a chasing pack that seems to have Tahuriorangi at the top with Drummond, Weber and possibly Bryan Hall in the mix too.

Whoever is picked should offer up a quiet ‘thank you’ to the injury that’s ruled Damian McKenzie out for the year as Hansen has revealed he would have been picked as cover for halfback as well as first five and fullback.

Weber and Anton Lienert-Brown have been consistent quality in a Chiefs side that’s been largely poor this year despite the euphoria of their win against the Crusaders in Suva.

Add a third person to that now with the return of Sam Cane. It took the All Blacks openside only three games to find his form and Hansen will be smiling at the options he now has in his loose forwards.

The worry has been blindside flanker and if Liam Squire doesn’t find fitness and form, then Hansen would do worse that opt for Cane at six and Ardie Savea on the openside.

Cane is a terrific tackler and his strength over the ball would be just as useful with a six on his back as it would a seven.

That would be a shift from the All Blacks’ conventional thinking but it is not without precedent with Michael Jones finishing his career at six.

Interestingly, Hansen has said there’s no chance of Cane and Savea on the flanks together but there is a chance Savea could be at eight with Cane at openside.

Elsewhere there has been a mix of form from some of the established All Blacks with a welcome return by Waisake Naholo and some consistent quality from locks Scott Barrett and Patrick Tuipulotu.

Up front, the mix of form is particularly acute with a form XV from the past four rounds especially hard to pick, but here goes.

Afternoon test match rugby is back! The All Blacks take on Tonga in Hamilton at 2:35pm on Saturday the 7th of September. Don't miss out, book your spot below. ???????? 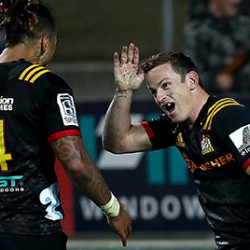