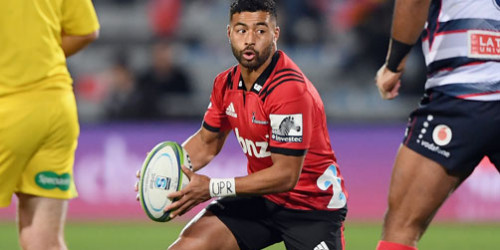 With one round to go before the Investec Super Rugby playoffs the sides with no chance of making it through are: Sunwolves (12), Reds (28), Blues (29), Waratahs (30).

Teetering in no-man's land and dependent on winning with a bonus point and other sides not registering points at all, are the Chiefs, Highlanders and Sharks.

QUICK TAP: HURRICANES SECURE HOME QUARTERFINAL
The South African Conference will determine the final outcome as the Stormers host the Sharks while the Bulls host the Lions.

In a 24-24 draw with the Bulls, the third time they had shared the points, the Highlanders had their season summed up. Out to a comfortable lead and playing the game at the pace they wanted they became bogged down in a scrummaging contest on their own line in the second half and were unable to get out of their own territory long enough to put the game to rest.

A similar fate awaited the Blues in their 28-29 loss to the Reds in Brisbane. Starting as well as they had all season, the Blues then allowed the Reds to slowly work their way back into the game. The same silly mistakes that have marred the Blues performances for five or six seasons manifested themselves again in a win that was denied them in the final moments.

Poking the Crusaders bear as has happened over the past month was always going to rebound on someone and it was the Rebels who bore the brunt in a 66-0 hiding in Christchurch. This was the Crusaders performing on a higher plane and leaving nothing to chance. Richie Mo'unga was outstanding in his precision while Braydon Ennor and Sevu Reece chimed in with respective hat-tricks of tries.

The Hurricanes wanted impact from their bench in the second half, and after the scores were tied at 10-10 at the break, that was crucial. After wing Ben Lam scored his first try from the restart, flanker Ardie Savea came on to make a storming sideline run to set up Lam's second and then replacement hooker Dane Coles celebrated being back among the action by picking up two tries, the first a fine supporting effort and the second from a lineout maul for the 37-17 win.

After a season rebuilding and developing confidence among his young side, coach Brad Thorn had plenty to savour in the way his side fought back to claim a late 29-28 win in Brisbane. It was a fitting send off for No.8 Scott Higginbotham that he should make no mistake in scoring his second try while goal-kicker Bryce Hegarty sealed the deal with a key conversion.

Having such a fine season the Rebels could have expected to offer more resistance against the Crusaders but they were in the wrong place and the home team were in the wrong mood in Christchurch as they inflicted a 66-0 thrashing on the visitors. The sad news is that if the playoffs positions remain the same they will have to go through it all again in the quarterfinals.

Storming out to an impressive halftime lead of 28-3 the Brumbies secured the home playoff berth for the quarterfinals with a classy display of continuity between backs and forwards. The Waratahs attempted to come back in the second half but they had left their run too late and in the end it was a deserved 35-24 win for the visitors at Parramatta.

The Sunwolves may be destined to finish a clear last in the competition but they were competitive enough to deny the Stormers a key bonus point in their 18-31 loss at Newlands. The Stormers need to beat the Sharks next week to claim a playoffs place. But they will need to play with more consistency and clarity than they managed in Saturday's game.

Bulls scrum power paid off immensely under the roof in Dunedin in a game which started with plenty of attacking intent from both sides although it was the Highlanders who fared best. But slowing the game down in the second half the Bulls camped in the Highlanders half and inched their way ever closer to tying up the scores to keep their playoffs hopes alive when they head back home with a second draw, this time 24-24.

Even facing a Hurricanes down on strength, and without star five-eighths Beauden Barrett, who was a late withdrawal, the Lions couldn't contain a rampant Hurricanes side who benefited from the second infusion of flanker Ardie Savea and hooker Dane Coles to claim a 37-17 win which was fuelled by the try-scoring class of wing Ben Lam and second five-eighths Ngani Laumape.

The Stormers had to work hard to claim a 31-18 win over the Sunwolves in Cape Town. Ahead 14-6 at the halftime break it was late in the third quarter before they gained the key breakthrough, but even then that wasn't enough to quell the Sunwolves who fought to the end with wing Semisi Masirewa scoring two tries as they denied the Stormers what may prove a crucial bonus point.

Solid Jaguares defence allowed the Sharks little chance to build a strong enough position in Buenos Aires and the home team ensured themselves of winning the South African Conference with a 29-7 win. It wasn't until the 67th minute that the Sharks scored as the Jaguares rearguard of wing Sebastian Cancelliere and fullback Emiliano Boffelli scored a brace of tries each in the bonus point win.