Upsets galore continued in what has become the most competitive Investec Super Rugby competition in years.

The Sharks' 42-5 thrashing of the Lions was the biggest but the Jaguares' 22-20 win over the Bulls was up there while the dominance of the Reds in their 24-12 win over the Stormers was another.

QUICK TAP: FOUR WINS BUT PLENTY TO WORK ON FOR THE BLUES
If the play-offs were held next weekend they would see: Crusaders v Waratahs, Hurricanes v Blues, Rebels v Lions, Sharks v Bulls.

New Zealand Conference
It was tough for the Highlanders to go down yet again by three points to the Hurricanes 28-31 in Dunedin. It is said rugby is a game of inches and the Highlanders have been suffering shortness in that department with some close results not going their way. The Hurricanes were able to step up with their pack in the crucial stages again to get a win that they also needed. The way their top players accepted responsibility for securing the win was impressive with flanker Ardie Savea continuing his outstanding form.

Back on home turf, and given a shake-up in the first half, the Crusaders demonstrated not only their stamina to turn things around in the second half but also their sheer cussedness in denying the Brumbies the air they needed to secure a 36-14 win that maintained their dominance on the points six points clear of their nearest rivals, although still to have a bye. What highlights their performances is the way their emerging players step up to contribute at crucial stages. They remain the team to beat.

Showing more of their emerging togetherness, the Blues were forced to work hard before claiming their 32-29 win over the Waratahs at Eden Park. The fact that the Waratahs have only ever won once in Super Rugby history in Auckland is a phenomenal statistic and the Blues showed rare determination to ensure that statistic remained alive. Second five-eighths Ma'a Nonu was outstanding but lock Patrick Tuipulotu continues to grow in stature with strong play up front. The solidity Ofa Tuungafasi added to the scrum when he took the field was also impressive.

Australia Conference
It may not have been one of the prettier wins but the last person concerned about that will be Reds coach Brad Thorn. Establishing a winning mentality has always been the prelude to advanced play and in achieving a 24-12 win over the Stormers, the Reds have set up the remainder of their season. They are within catching distance of second place in the Australian Conference and that represents a big advance for an emerging side.

Beating a strong Crusaders side is hard enough with 15 men but to play a quarter of the game with only 14 is going to make life tough for even the best of sides and that was what a lively Brumbies side learned when going down 14-36 in Christchurch on Saturday. Three tries were scored while they had players in the sin-bin and that marked the difference for the visitors. Back in fourth position on the points table in the Australian Conference, the Brumbies are in need of more consistency to their play. Repeating what they achieved in the second quarter for 80 minutes would make them a much more formidable opponent.

Coming back from 0-17 down very early in their game at Eden Park the Waratahs got within an ace of victory before being unable to secure key points and losing 29-32. Using a powerful lineout to advantage, the Waratahs pack looked a side capable of causing problems, but fortunately for the Blues they had the defensive capability to hold out often enough to stay in front. The Waratahs also took the Blues on in the backs but their fallback option was too often limited to the aerial skills of fullback Israel Folau, even if he is now the scorer of most tries in Super Rugby history with 60.

Out to an early lead, the Rebels played with confidence to claim a 42-15 win over the Sunwolves in Melbourne. Fullback Reece Hodge had a big night out, scoring two tries in the first minutes and adding a third later for his hat-trick. Dominating the breakdown, the Rebels dictated terns throughout and have claimed a deserved lead in the Australia Conference with first five-eighths Quade Cooper maintaining his run of form to land six conversions from six to go with the try he also scored.

South Africa Conference
Of all the results that might have been anticipated from the weekend, the Lions going down 5-42 to the Sharks in Johannesburg was the least likely. The Lions, the best-performed South African side in recent years, were dreadful. Down 0-25 at halftime they were hammered defensively, conceding turnovers and hurried into making errors that merely fed the Sharks' fires. With Sharks fullback Curwin Bosch enjoying a field day with his incursions into the line, the Lions were at sixes and sevens and now find themselves third on the Conference ladder with the Sharks out in front.

Losing skipper and flanker Siya Kolisi to a yellow card just before halftime cost the Stormers dearly. There had been no score by that stage but at the start of the second half the Reds struck early with two tries while Kolisi was still off the field to set up their 24-12 win. The Stormers didn't help themselves when losing two first half chances while in the crucial stages of the second half as they looked to mount a recovery they conceded a string of penalties which allowed the Reds to turn the pressure back on them.

The Bulls found themselves on the end of some Latin magic in the last 10 minutes of their game at Loftus Versfeld. Down 10-20, the Jaguares unleashed a myriad of moves to score two tries, one of them converted, to take a 22-20 win. The home side seemed mesmerised by the intensity of the Jaguares' approach which saw Domingo Miotti score twice. By comparison, the Bulls had to rely on goal-kicking with Manie Libbok landing five penalty goals with Handre Pollard being rested, scoring only one try.

?? It's a @rugbyworldcup year and someone is keeping a close eye on the action. Are you picking any @AllBlacks bolters from #SuperRugby this year? pic.twitter.com/Dnhk48aDq1— Super Rugby (@SuperRugbyNZ) April 6, 2019 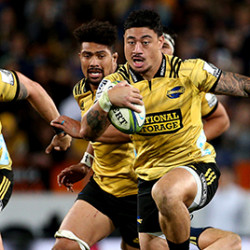