Few would have believed the shape the points table of the Investec Super Rugby competition has taken after the first four rounds.

No surprises with the Crusaders on top, four points clear of the field, but the Bulls and Rebels sitting second and third on the overall points table would not have been predicted.

QUICK TAP: FOUR-TRY RIEKO IOANE PUNISHES SUNWOLVES
If the playoffs were held next weekend, there would only be three New Zealand teams involved, one fewer than last season with the battles being endured by the Chiefs.

New Zealand Conference
The Highlanders enjoyed dominance in the forward exchanges but the Hurricanes had the skill factor on their side in claiming a 25-22 win at Westpac Stadium on Friday. It came down to a Beauden Barrett penalty goal at the end, but the Hurricanes managed to overcome the disadvantages they faced in the tight through the quality of their back play where second five-eighths Ngani Laumape and wing Ben Lam were too strong for the Highlanders' defensive efforts and therein lay the difference between the sides.

Who can halt the Crusaders? That has to be the question after their superb display to beat the Chiefs 57-28. Don't be fooled by the 28 points scored by the Chiefs. The damage had been well and truly done by the time they scored two late tries. What made the Crusaders effort all the more outstanding was that it was achieved in the absence of several key players. This was a celebration of the Crusaders' recruiting system and the ability to mould players to the demands of the Crusaders' system. As for the Chiefs, they have plenty of work to do to regain their former stature.

Ill-discipline by the Sunwolves was met by determination not to let chances slip from the Blues in their 28-20 win in Albany. Coughing up chances when having built good attacking positions, the visitors gave themselves less opportunity for success while the home side overcame the trauma of the loss of a teammate and a heavy travel schedule to secure a much-needed win. They also did it by giving their outstanding finisher wing Rieko Ioane the chance to run in four tries. When the Blues play as a team they are a much more formidable combination and that was evident in their win.

Australia Conference
Up 19-3 at halftime, the Brumbies are probably still wondering how they managed to lose this one 26-29 in Melbourne. The power of the Brumbies pack dominated the first half, especially on the lineout drive which resulted in two tries, one of them a penalty try. But using their own forward power to create a foundation for their backs, the Rebels turned it on for their fans and had whittled away the lead to get in front with 10 minutes of the game remaining. They then managed to hold on to make it consecutive wins over their neighbours and to stay on top of the Australia Conference.

The extra pressure that goal-kicking can create was missing for the Reds and they went down 17-28 to the Waratahs at the august Sydney Cricket Ground on Saturday. The home team made the most of the occasion and it was their try within 60 seconds of the start of the second half to Brad Rona that made the difference on the night. The Reds are an improved unit but are still missing the ability to seal key moments to be a genuine force. It was a good win for the home team who scored some good tries to demonstrate the danger they remain in the Conference.

Impressive in their running onto the ball, and their ability to make initial gaps, the Sunwolves lacked the finish to turn their skill into points. They also proved too easily distracted from their central cause and allowed the Blues respite when a better team would not have let their chances go. Smaller in bulk than the home team, the Sunwolves nevertheless contested everything and demonstrated growth in their game. Impressively led by Michael Little, the Sunwolves, once cured of their indiscipline shape as a team to achieve more this season.

South Africa Conference
Scoring 39 points didn't even provide a bonus point for the hapless Jaguares in their 39-47 loss to the desperate Lions at Ellis Park on Saturday. Starting the game at the bottom of the South Africa Conference, the Lions found their mojo and with their ability in the loose play enjoyed a halftime lead of 26-13. They quickly added to that with three tries in the 10 minutes after the restart. However, the Jaguares employed their lineout drive to effect to score and then finished strongly with two late tries that made the most of indifferent defence from the Lions.

It is clear from the influence shown by Bulls first five-eighths Handre Pollard that he is shaping as a key strike force for the Pretoria-based side. His goal-kicking helped his side to a 19-0 halftime lead but in the second half, just as the Sharks scored and started to work their way back into the game he unleashed the break that put the issue beyond the visitors and the Bulls claimed a comfortable 37-14 win, with Pollard contributing 22 points.

Missed any of the action from the weekend? Catch the highlights from every match right here ????????????https://t.co/hq0ifLuj2D pic.twitter.com/aYVvBx0i3j— Super Rugby (@SuperRugbyNZ) March 9, 2019 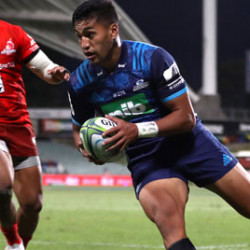