No surprise is attached to who will contest the Investec Super Rugby final in Christchurch next week as the two best teams, the Crusaders and Jaguares, came through to set up a fascinating finale next week.

For the top-ranked home team it is a chance to achieve a second hat-trick of Super Rugby titles while for the Jaguares it is an opportunity to achieve a spectacular advance across four years of involved in the competition.

Making a near perfect start, the Jaguares scored at point-a-minute pace in the first quarter and got out to a 20-0 lead from which the Brumbies were never able to recover.

The 30,000 crowd enjoyed the finest moment in the Jaguares' four-year history as they reached their first Super Rugby final.

Dominating the lineouts, although worryingly ahead of the final in Christchurch they did not have the same advantage in the scrums, the Jaguares scored five tries to one, the almost inevitable try to hooker Folau Fainga'a.

"We have come a long way since a disappointing first season not too long ago. Each year we have improved and now we are in the final. It would be wonderful to have the final here at our home ground in front of such passionate supporters, but we will not fear travelling to New Zealand," he said.

Brumbies captain Christian Leali'ifano, who played his last game for the side, said he was disappointed.

"But the Jaguares were very good and put a lot of pressure on us which, inevitably, resulted in mistakes," he said.

The Hurricanes scored four tries to three by the Crusaders but the unerring boot of first five-eighths Richie Mo'unga made the difference in their semifinal win in Christchurch.

It may have been mid-winter but the conditions were excellent and both teams made the most of them to produce a classic contest. The Hurricanes overdid their kicking game in the first half, giving the Crusaders the opportunity to build a solid lead but tries either side of halftime for the Hurricanes breathed more life into a contest which became riveting.

Even in the circumstances both sides produced skilful play that belied the intensity of the occasion. Hurricanes halfback TJ Perenara had an outstanding night, first five-eighths Beauden Barrett put in a physical all-round display while second five-eighths Ngani Laumape pressured the Crusaders defence. And that wasn't to forget the effort of the often-maligned Hurricanes pack where flanker Ardie Savea and hooker Dane Coles brought all their experience to bear.

But the consistency of the defending champions, especially in their defence in key moments was enough for the Crusaders to hold on. Lock and captain Sam Whitelock, No.8 Kieran Read and flanker Matt Todd were key influences up front while Mo'unga was everywhere on the back of the ball provided by his pack. Wing Sevu Reece scored twice to show what a dynamic presence he has.

The stage is set for a superb finale. 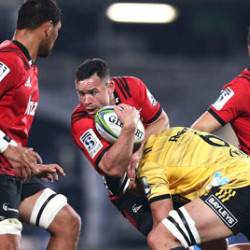