TEAM NAMING: Blues muscle up for 2019 Should the Blues manage to avoid the injury problems that placed such heavy demand on them in 2018, they look set to deliver a much better, and long awaited, period of sustained success in 2019, and beyond.

One of the problem areas for the side had been delivering a consistently solid platform up front, but that appears much more likely as the result of gains made.

QUICK TAP: MA'A NONU BACK IN BLUE FOR 2019 SUPER SEASON
Having Karl Tu'inukuafe back in home territory to work with Ofa Tu'ungafasi, Sione Mafileo, Alex Hodgman, Marcel Renata, and the promising newcomer Ezekial Lindenmuth, will go a long towards boosting the Blues scrum.

Coach Tana Umaga has not made too many changes overall to the squad originally chosen for the 2018 campaign. But Auckland's success in winning the Mitre 10 Cup is reflected in the selection of several players from that side.

Northland lock/loose forward Tom Robinson is one newcomer who had a good campaign in Mitre 10 Cup rugby for his province to help his selection.

Hoskins Sotutu will add some size to the loose forwards. He was part of the Auckland Mitre 10 Cup-winning side, was part of the Blues team that won the Brisbane 10s in 2018 and is a former New Zealand Under-20s player. Another loose forward is former Canterbury flanker Jed Brown, who played nine times for Tasman this year.

His outside back teammate Levi Aumua made a big impression in Tasman's Mitre 10 Cup campaign but also had two games for the Chiefs and has played in France and Australia.

Bryn Gatland's departure for the Highlanders has seen Auckland first five-eighths Harry Plummer join the first five-eighths mix with Otere Black and Stephen Perofeta while another exciting player Tanielu Tele'a has had his decision to tie his colours to the New Zealand mast rewarded with inclusion. He played for Samoa's Under-20 side in 2017 but switched to New Zealand for the 2018 campaign.

Fingers crossed for you ????

Massive shout out to @SonnyBWilliams earning his 50th test cap for the All Blacks.

An incredible man on and off the field. 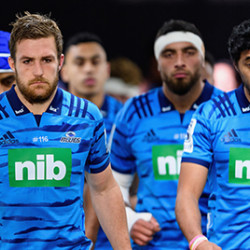