The end of an era - Sir Brian Lochore 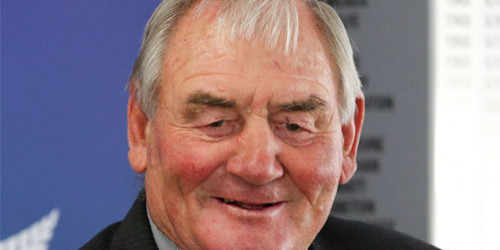 New Zealand Rugby is mourning the loss of one of the most respected and iconic figures of the game, former All Blacks Captain, All Blacks Selector and All Blacks Coach, Sir Brian Lochore, who passed away on Saturday August 3, aged 78.
Lochore, All Black #637, represented New Zealand in the black jersey on 68 occasions, including 25 Tests. He was the All Blacks Captain in 1966 and went on to lead the team in 18 Tests.

In 1985-87 Lochore become the All Blacks coach, with his crowning achievement winning the 1987 inaugural Rugby World Cup.

He was made a Knight Companion of the New Zealand Order of Merit for services to sport and the community and also inducted to the International Rugby Hall of Fame in 1999. On Waitangi Day in 2007, he received the country's highest honour, the Order of New Zealand.

“It is with great sadness and grief that we announce that Sir Brian succumbed to his battle with cancer, earlier today. We have lost a genuine legend of our country, an unwavering figure on the field, and a highly respected figure off it. His family has lost a devoted husband, father and grandfather and for many of us, a great friend.

“It is not over-stating the facts to say that Sir Brian Lochore, was the saviour of New Zealand rugby on several occasions and many of us have lost a great mate. Our hearts go out to Pam and their children.”

All Blacks Head Coach Steve Hansen said: "It’s with great sadness that we have heard that one of New Zealand’s tallest kauri has fallen.

"Sir Brian Lochore is one of of the most respected men in New Zealand, not only in rugby but all facets of New Zealand life, as well as being hugely respected and held in high regard around the world.
"On behalf of the All Blacks and myself personally, we pass on our deepest sympathies to Pam, their kids David, Joanne and Sandra and the wider Lochore family. Our thoughts and prayers are with them. Arohanui from us all."

All Blacks Captain Kieran Read said: “This is an incredibly sad day. Sir Brian was an icon of our game. On behalf of all players, our thoughts go out to his family at this time.”
Outside of rugby he contributed to many organisations including his role as Chair of the Queen Elizabeth II National Trust, Chair of the Commission at Kuranui College through challenging times, served on the Hilary Commission (becoming Chair in 1999) and the Sports Foundation and he was very well respected in the farming community.

Sir Brian Lochore
Brian James Lochore, born September 3, 1940, Masterton. Died 3 August 2019. Educated, Opaki Primary School, Wairarapa College, Test matches 25, total All Blacks appearances 68, debut v Oxford University, Oxford, October 23, 1963, final game, v British & Irish Lions, Wellington, July 31, 1971, 18 Tests as captain. All Black number 637. All Blacks selector 1983-87, coach 1985-87. Campaign manager 1995 Rugby World Cup. Advisor at 2007 Rugby World Cup. Life member NZR 2013. Patron NZR 2013. Knighted in 1999 and awarded the Order of New Zealand 2007. Received the IRB's (World Rugby) award for distinguished service in 2006.
In his playing career for New Zealand, which began when he was selected to tour Britain, Ireland and France in 1963-64 as a No.8 – a position he had never played before, he captained the All Blacks through a golden era when they didn't lose a Test match between the fourth Test against South Africa in 1965 and the first Test in South Africa in 1970.
During those years, the side he led to Britain and France in 1967 was regarded as one of the finest of all rugby teams. Under coach Sir Fred Allen's mantra of running the ball, the side revitalised the British game while Lochore's actions in the final game of the tour helped the side come from behind to beat the Barbarians thus ensuring an unbeaten tour.
Lochore said he never found out who was responsible for his selection as No.8 after the final trial to choose the team for Britain and France in 1963, but he was forever thankful because he proved ideally equipped, physically and philosophically, for the position and he became one of its great exponents.
He made his Test debut on that tour, against England, after a call-up on the morning of the game. But after returning to New Zealand he was not called upon again until the 1965 series against South Africa. A year later he had been chosen captain ahead of front runners Colin Meads, Kel Tremain and Ken Gray. They immediately pledged their support to him.
Allen explained his choice of Lochore in his book Fred the Needle: "I was never in any doubt because there was one man I had been studying for some time and I saw in him the qualities of leadership I had been looking for. I felt that, given the chance, he would become a great captain and I also knew that he would support me one hundred per cent in the type of rugby I intended to promote." 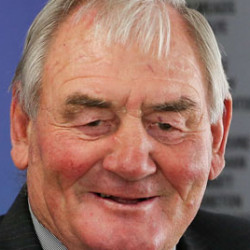 View all
Intriguing halfback clash shaping for Ireland series
Halfback is shaping as one of the most intriguing areas of contest when the All Blacks play Ireland in July's three-Test series in New Zealand.
Māori All Blacks to play two-match series against Ireland
The Māori All Blacks will play Ireland in two mid-week matches in Hamilton and Wellington this July New Zealand Rugby (NZR) announced today.
Cocksedge suits up for Taranaki club Coastal
There aren’t too many things Kendra Cocksedge has left to achieve in her illustrious rugby career, but Saturday brought a first for the Black Ferns halfback, debuting for the Coastal women’s team in Rāhotu.
Blues well up for huge clash with Brumbies in Canberra
Sitting seven points clear of the DHL Super Rugby Pacific pack, the Blues know the value a win over the second-placed Brumbies in Canberra on Saturday would provide heading into the playoffs.
Thorne impressed with what Leon MacDonald has done with the Blues
Reds coach and former World Cup-winning All Black Brad Thorn said his side paid the cost of missing far too many tackles in their 26-53 DHL Super Rugby Pacific loss to the Blues at Eden Park on Saturday.
Perofeta finding form at right time for the Blues
Blues backs Stephen Perofeta and Beauden Barrett are fast becoming DHL Super Rugby Pacific’s most effective one-two punch and the younger half of the dynamic duo has revealed clear, simple communication is the not-so-secret key to their success this season.
Clean sweep for Kiwi sides in Round 13
New Zealand sides achieved a clean sweep of wins in round 13 of DHL Super Rugby Pacific at the weekend, although it took a last minute try, in the last game, for the Chiefs to complete the sequence.
Gilbert reveals secret to perfect night from the tee
Start early, keep at it and develop a simple process was the advice for junior rugby players from Highlanders first five Sam Gilbert after he knocked over a perfect 8/8 conversions to guide his team to a 61-10 win over the Western Force in Dunedin on Friday night.
Tysha Ikenasio joins Black Ferns Sevens fulltime
A month ago Tysha Ikenasio was working fulltime as a personal trainer and earnestly ploughing through her Police application when she received a surprise phone call from Black Ferns Sevens coach Cory Sweeney.
Catch the Black Ferns in action throughout the Pacific Four Series
Tickets are now on sale for the 2022 edition of the Pacific Four Series which serves as crucial preparation for Rugby World Cup 2021, playing in 2022.
Blues ready to step up to next level
Facing Australia's best three teams over the next three rounds of DHL Super Rugby Pacific, starting with the Reds in their final round-robin game in Auckland on Saturday, will be a next-level step for the Blues.
Weber returns for Rebels clash in Melbourne
The Gallagher Chiefs have named a strong side to travel to Melbourne to take on the Rebels at AMII Park on Sunday. With a 4pm kickoff (NZ time), the Gallagher Chiefs are chasing a vital game as they push for a top-four spot and home field advantage for the upcoming playoffs in DHL Super Rugby Pacific.
Blues named for final regular season game at Eden Park
There is a relatively settled look to the Blues team for their final regular season clash in the DHL Super Rugby Pacific competition.
Home playoffs spot a motivating factor for the Chiefs
Three games remain for the Chiefs to lift their DHL Super Rugby performance to a more competitive level, and the Rebels on Sunday in Melbourne will be the next challenge for the side.
Ardie Savea back for Waratahs clash
Head Coach Jason Holland has named his Hurricanes squad with few changes to the 23 that comfortably beat the Fijian Drua on Sunday.
Highlanders confident Gilbert can handle 10 jersey
No coach has proven more capable of springing selection surprises than the Highlanders' Tony Brown, and his latest is choosing Sam Gilbert at first five-eighths in Friday's DHL Super Rugby Pacific game against the Force in Dunedin.
"We know what's coming" - Scott Robertson ahead of Brumbies clash
Plenty hangs on the outcome of the Crusaders-Brumbies DHL Super Rugby Pacific game in Canberra on Friday, and no one appreciates that more than coach Scott Robertson.
All Blacks Sevens ready to impress again on the World Stage
The All Blacks Sevens leave New Zealand tomorrow for the next two legs of the Sevens World Series, with tournaments in France and England their last international preparation before July’s Commonwealth Games.
Moana Pasifika team named to play Fijian Drua in much-anticipated first match
The much-anticipated match between DHL Super Rugby Pacific’s newcomers, Moana Pasifika and Fijian Drua, is set to take place on Saturday 14 May at Sydney’s CommBank stadium, with a local kick off time of 2:35pm.
Crusaders leaders return to face the Brumbies in Canberra
The return of Captain Scott Barrett and Vice-Captain Codie Taylor are among five changes to the Crusaders starting side to face the Brumbies, in what promises to be a huge Trans-Tasman clash in Canberra on Friday night.