The south takes the early honours

The Wallabies have engineered the most head-turning result of the weekend’s international matches outside of New Zealand.
Their 18-9 win over Ireland in Brisbane not only brought a shuddering halt to the winning streak of 12 by the world’s No 2-ranked team, but also revived hopes of a more competitive showing in the Rugby Championship.
QUICK TAP: WORLD REACTS TO ALL BLACKS WIN OVER FRANCE
Ireland mixed and matched with its selections, opting to bench Johnny Sexton, but Joe Schmidt’s men did take a 9-8 lead deep into the second spell.
There were likely and unlikely heroes for the Wallabies. David Pocock, operating at blindside flanker, was his typical robust and energetic self in his first test start in more than 18 months. But right wing Dane Haylett-Petty also stood tall, saving a certain try to Ireland No 8 CJ Stander with a superb tackle, while also giving the last pass for Bernard Foley to open the scoring.
Ireland’s pack seemed tired in the critical third quarter, coming under scrum heat led by former Sacred Heart College First XV prop Taniela Tupou.
Crusaders loose forward Pete Samu came through 32 minutes off the bench.
New Zealand TMO Ben Skeen had another busy night, being called upon several times, and ruling out a try to Israel Folau due to an infraction by lock Adam Coleman.
Ireland’s 39-year drought against Australia on the sunburnt island continues, while lock James Ryan, after 24 games, has finally tasted a professional rugby defeat.

An 18-9 win for your #Wallabies at @suncorpstadium tonight!

After falling narrowly to Wales in Washington DC, the Springboks handed new coach Rassie Erasmus his first victory with a 42-39 thriller over England in Johannesburg.
The final scoreline does not the full story of an extraordinary encounter in which England bolted to a 24-3 lead in the first quarter, before the Springboks then utterly dominated the next 50 minutes. To the fore were debutant wings S’Busiso Nkosi, who recorded a double, and Aphiwe Dyanti, who scored a try, and rookie lock RG Snyman, who threw himself around and won ball with great effectiveness. Halfback Faf de Klerk, who now plies his trade in the Aviva Premiership with Sale Sharks, was a ball of energy.
Mako Vunipola’s 50th test for England looked to be on course for victory, as England struck early via sweetly taken tries to Mike Brown, Elliot Daly and captain Owen Farrell. Hurricanes captain Brad Shields entered the fray just before the break, but at lock. He was typically industrious, linked well and won his lineout ball.
Like the All Blacks, the Springboks bench gave full value, especially prop Steven Kitshoff, and while England fired two late tryscoring salvoes, the Springboks had the game won.
England has now lost five straight matches, and Eddie Jones’ men will want to swiftly redress the balance this week in Bloemfontein for the second test.

This is what it means. For the player, for the fans, for the country. #LoveRugby pic.twitter.com/JPZTf4ghiU— South African Rugby (@Springboks) June 9, 2018 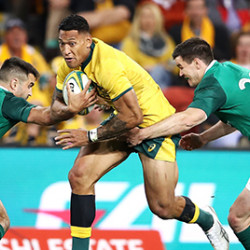