The New Zealand Under 20 programme has long been a launching pad for some of the country’s top emerging talent.

Of the team that played at the 2018 World Rugby Under 20 Championships, nine players have been contracted to Super Clubs for the coming Investec Super Rugby season and will no doubt be looking to make their mark.

QUICK TAP: INVESTEC SUPER RUGBY 2019 SEASON PREVIEW
We have a look at some of those players set to have big futures...

Punivai is a versatile back that has progressed through the ranks from captaining the Christ’s College 1st XV to picking up a Crusaders contract for 2019. With 12 Mitre 10 Cup caps to his name and an appearance for the New Zealand Under 20s last June, Punivai will look to bring his size and speed to the Crusaders backline in 2019. A smart player with a solid work ethic, Punivai can learn from the likes of Jack Goodhue, David Havili and George Bridge to could well join them as Crusader super stars.

Proctor hit the headlines last year when he signed a five-year contract with the Hurricanes – the longest contract ever signed in the club’s history. If that doesn’t speak to his potential, you just needed to watch him in action for both the New Zealand Under 20s and Wellington Lions in 2018. Following in the footsteps of his older brother and one-cap All Black Matt, Billy is a hard-hitting midfield back and will look to push incumbents Ngani Laumape and Vince Aso in 2019.

Laghlan McWhannell comes into his first season of Super Rugby with two years of Mitre 10 Cup under his belt. The mobile, rangey lock pulled on the Chiefs jersey in 2018 at the Brisbane 10s and has proven himself as a hard-working lock with a strong, physical presence. Standing just shy of two metres, expect McWhannell to be under the wing of Brodie Retallick in 2019 and become a regular fixture in Chiefs colours.

?? Get #SuperRugby in your calendar this season! Stay up to date with your team and who they are playing each week! It's easy to set up!

The Blues first five-eighth position is one of the most talked about subjects in Super Rugby and young Auckland product Harry Plummer might well be the answer. Vice Captain of the New Zealand Under 20s last year, Plummer went on to help guide Auckland to their first Mitre 10 Cup title in more than a decade. Blues coaches said “his outstanding season for Auckland belied his years” and there is little doubt he will get a crack in the number 10 jersey this season. Plummer is an accurate goal kicker with impressive vision and confidence.

Much has been spoken about the large boots Caleb Clarke has to fill, his father, former Blues and All Black Eroni Clarke was part of the Blues’ golden years. Clarke has proved to have all that class and some, playing for the New Zealand Under 20s in 2017 and 2018 as well as a stint with the All Blacks Sevens. Clarke combines his turn of pace with incredible strength and power and is a genuine starting option for the Blues. 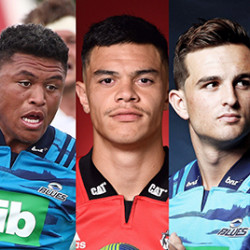