An injury-depleted Waikato retained the Ranfurly Shield in dramatic style on Sunday with a 20-20 draw with Taranaki - the first shield stalemate between the two sides since 1953.

Taranaki illustrated their Premiership credentials with an impressive first half on attack, building an 8-0 lead within half an hour.

However, Waikato's defensive resilience showed why they were the defending shield holders. They added insult to injury after the halftime siren sounded, when wing Sevu Reece scored to reduce the gap to 5-8.

Reece scored early in the second half, but Toa Halafihi nabbed a second half brace to hand the visitors a 20-12 lead with a quarter of the match to play.

On his return from All Black duty, Seta Tamanivalu was penalised for a shoulder charge that denied teammate Stephen Perofeta what should have been the match-winning try.

Instead, it gave Waikato the territory they needed, and a Sam Christie penalty saw the match even at 20-20, which was how it finished.

As well as retaining the Ranfurly Shield, Waikato avenged their 0-41 defeat to Taranaki last year, in what was their first win over the Bulls since 2013.

Both sides picked up a valuable two competition points in the first Ranfurly Shield draw between the two sides since 1953, when Waikato claimed a 3-3 draw. Taranaki hold second in the competition with 20 competition points, while Waikato moved Auckland out of the top four on points differential with 17 points.

The result was a big morale boost for the Mooloos, who play Counties Manukau away before hosting Canterbury in what should be another Ranfurly Shield classic.

For Taranaki, who retained the Ryan Wheeler Memorial Trophy, the Tamanivalu incident was the difference in a fantastic encounter between the two rivals. The task doesn't get any easier, with a home match against giant-killers Manawatu scheduled for Saturday.

Already missing the likes of Loni Uhila, Isaac Boss and Stephen Donald, Waikato were dealt another blow when dynamic No.9 Tawera Kerr-Barlow was sinbinned seven minutes into the game. Referee Ben O'Keeffe deemed the halfback deliberately slowed play down from a Taranaki quick tap, and he was marched off the field.

Sensing the importance of points, Taranaki elected to kick for goal and Marty McKenzie duly converted to give his side a 3-0 lead after 11 minutes.

It would be the only point-scoring note in Kerr-Barlow's absence, but Taranaki's lead increased to eight thanks to Johnny Fa'auli's try in the corner.

The second five-eighths was the benefactor of a breakout from Manasa Mataele, who found Fa'auli on his outside and the visitors were jubilant.

Despite spending over five minutes in the Waikato danger zone in the first half, the Mooloos held firm and had a try of their own through Reece as the halftime hooter sounded.

If the first half was about defensive resilience, the second was about scoring points. Reece scored his second try in a superb team effort that involved no fewer than five players. The Fijian wing had plenty to do, but ran 35 metres after a left-foot step to give the Mooloos a 12-8 lead, their first of the afternoon.

It took the Bulls just two minutes to respond, and when Toa Halafihi picked up the ball from the ruck, the No.8 ran straight through the middle and scored under the posts to restore a three-point lead for the visitors.

Halafihi butchered one tryscoring opportunity from a scrum at close range, but the No.8 made no mistake with a pushover try to give his side a 20-12 lead with just over 20 minutes to play.

Waikato upped the attacking intensity in the final quarter, and when young fullback Tyler Campbell scored the first try of his Mitre 10 Cup career, the hosts were within three points.

Tamanivalu's shoulder charge denied Perofeta, and Waikato made the visitors pay at the other end with Christie's first penalty of the afternoon to retain the prized shield.

To view all stats for the Mitre10 Cup season click here 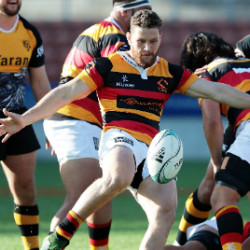