All Blacks and Highlanders winger Waisake Naholo will leave New Zealand at the end of 2019, it was announced today.

An attacking player who uses his deceptive speed and strength to terrorise opposing teams,Naholo first played provincial rugby for Wanganui as an 18 year old schoolboy. He has played 57 games for the Highlanders, after shifting from the Blues in 2015, and his dazzling form for the Highlanders that year earned him an Investec Super Rugby Championship title and All Blackss' selection. Naholo is also the Highlanders club top try scorer with 41 to date.

Naholo boasts 26 All Blacks Test caps, and has scored 16 tries.  He debuted for the All Blacks against Argentina in Christchurch in 2015 and overcame a leg injury to gain selection and play two matches in the Rugby World Cup 2015 in England.

While glad he has secured his future with London Irish ,Naholo said he was still 100 per cent focussed on his short-term goals.
“I’m looking forward to the opportunity of playing in the UK but I’m still very much focussed on the present and want to work really hard with the Highlanders to ensure we finish our season on a high,” Naholo said.
“I feel like I owe it to the Highlanders after all that has happened to me since I came down here in 2015 - it really changed my life. I’m very appreciative of everything the club has done for me and our fans are the best in the world. I also have other goals I’d like to achieve with the All Blacks in 2019, and I know our Highlanders fans will be right behind me all the way.”
All Blacks Head Coach Steve Hansen said:  “Waisake is a special member of the All Blacks group.  He’s an exciting player who brings an infectious sense of energy and humour to the team environment.  While we look forward to seeing him in action in New Zealand in 2019, we wish him well for his future ventures.”

Pulse Energy Highlanders CEO Roger Clark said that Naholo was a fan favourite.
“Waisake came down from Auckland in 2015 and had an immediate impact on team performance and the way we played the game. He is an excitement machine and there is nothing better than hearing his name chanted around the stadium as he runs in yet another try. His deeds will long be remembered by the Highlander faithful.”
Head Coach Aaron Mauger said: “ Waisake is a unique player who can make special things happen on a rugby field; he is always a threat to the opposition with that blistering pace and strength. He responded well to the Highlanders’ team environment and always seemed to get the best out of himself when playing at home in front of our fans. We wish Waisake and Moana all the best in the UK." 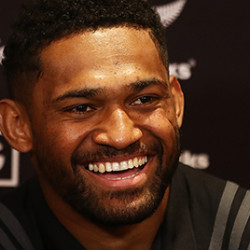