Deliverance day for All Blacks Rugby World Cup aspirations will be on August 28.

That's when the 31-man World Cup squad will be announced.

Coach Steve Hansen said Saturday's Bledisloe Cup-winning 36-0 win over Australia had in some ways, made the selection easier.

QUICK TAP: HANSEN HAPPY WITH BLEDISLOE CLEAN SLATE
"Some people really put their hand up last night and where we had question marks you no longer have question marks and in other ways it makes it a bit tougher too.

"Every time you name the team somebody misses out and it's the end of their dream and this is a pretty big one going to the World Cup," he said.

Tighthead prop and the midfield had been competitive positions and they had to consider where they take an extra blindside flanker or an extra lock?

With that in mind Hansen was pleased with the way Patrick Tuipulotu stood up in the absence of locks Brodie Retallick (injury) and Scott Barrett (suspension). But at the same time he revealed they had changed lock Tuipulotu's energy intake ahead of the game because they knew he was fit but he had been running out of energy pretty early in games and last night he went deep into the game and played well.

Hansen said Richie Mo'unga had suffered an AC injury that would be sore for a couple of weeks but was unlikely to keep him from playing longer than that. Centre Jack Goodhue was running again and was likely to be ready for the Tonga game while second five-eighths Ryan Crotty would play a game before the Tongan game.

Hansen said lock Brodie Retallick was making progress with his shoulder injury, he was getting more movement in it but it was one of those injuries where they would just have to wait and see.

He said they would like to have most of their front line players get some game time in the Tongan game in Hamilton on September 7 otherwise it was too long a break before they played South Africa.

Saturday's win had been massive, he said.

"Everyone externally was starting to get a bit shaky and starting to question if the coaches still had it, if the players still had it and to come out and show with real intent, I thought [Kieran Read] Reado was massive last night and he answered a lot of questions for a lot of people externally so the external group of our nation can now breathe slightly easier and we can all carry on working away to what we're trying to work towards.

Hansen said he understood the public's concern. It was because they cared.

"People externally have less of an idea of what it really takes to build your team and momentum and they expect you to start the season bang like that and when you compare the lead in time with Super Rugby they get three months to get ready for the first game.

"So five days is not enough time but it just takes time and we chose to even limit that time by splitting the squad over the first two games and as a result we were a bit scratchy to start but we're starting to get there.

The public scrutiny was a constant and it kept the All Blacks honest.

??? EXCLUSIVE COLUMN | The All Blacks attack was good but what about the defence? @JimKayes puts a microscope over the All Blacks performance in the Bledisloe Cup decider.

The day that New Zealand Rugby didn't have external scrutiny like it did then the game would be where it didn't want to be because people care and they had high expectations and those high expectations drove the internal expectations in the team as well.
Wings George Bridge and Sevu Reece had performed well when given the chance.

"We saw lots of energy, we saw a lot of intent and [they were] great under the high ball, great chasing kicks so it's a bit of pressure on the other guys now to front up. There's an old, old saying, never give a sucker an even break because he'll take it and now we've got some genuine competition so it will be good to see how it unfolds."

In relation to Wales moving ahead of the All Blacks in the world rankings Hansen said he didn't understand how the rankings worked but with the top sides in the northern hemisphere playing each other they got more points.

"We just need to get ourselves in the right frame of mind to go to the World Cup and win that, and not be too worried about [the rankings]," he said.

Don’t miss your final chance to see the All Blacks before the Rugby World Cup when they take on Tonga in Hamilton. 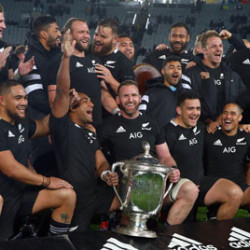