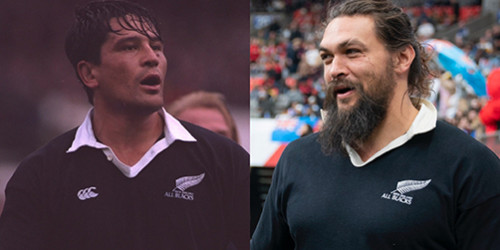 Zinzan Brooke is “delighted” that an old All Blacks match jersey of his turned up on the back of movie star Jason Momoa last weekend at the Vancouver Sevens.

The great All Blacks No 8 swapped the jersey with Canadian No 8 Glenn Ennis straight after the 1991 Rugby World Cup quarter-final in Lille, a match the All Blacks won 29-13, but not without some real trouble from the competitive Maple Leafs.

QUICK TAP: THE STORY BEHIND JASON MOMOA'S ALL BLACKS JERSEY
Ennis, who played 32 Tests from 1986-98, kept the jersey for 12 years before gifting it to Momoa on the set of Stargate Atlantis in 2003, where he was stuntman to the Hawaii-born actor.

Momoa, who most recently starred in Aquaman, was in the ground level VIP section at the Vancouver Sevens and was proudly wearing the jersey, a retro All Blacks cotton number which aroused much social media commentary as to its providence, while lending vocal support to the All Blacks Sevens.

Brooke picks up the story: “I was watching the Vancouver Sevens on the box. Aquaman was in the VIP section but was very accommodating and engaging with the fans. When he turned around, I saw that he had a No 8 jersey. I thought, ‘That’s just pure coincidence. That looks like a real jersey and, lo and behold, it is!’

“I was delighted. When (wife) Ali told me the (Momoa-Ennis) story, I thought ‘Wow’, that is very cool that it just happens to be the jersey I wore.”

Brooke admits to being a big fan of Momoa’s work.

“He was great on Aquaman. What was pleasing for me, though, was that he took the time out to talk to and engage with the fans. He grabbed the phones and took the photos. His feet have not left the ground,” says Brooke.

The first on-field meeting between Brooke and Ennis came in Auckland club rugby just after the 1987 Rugby World Cup. Ennis stayed on and played for the Grammar club, while Brooke was turning out for Marist.

They met again in Lille on that fateful 1991 day in wet, skiddy conditions, highlighted by the fact that veteran photographer Ross Setford broke his arm in a sideline fall.
“I remember it was cold, wet and windy. It was firm underfoot but you had to have long studs,” recalls Brooke. He scored a try from the famous ‘Varsity’ move first adopted by Auckland, in which, from a scrum, the halfback (on this occasion Graeme Bachop) cuts with the No 12 (Bernie McCahill) who in turn cuts with the No 8.

After the fulltime whistle, Ennis approached Brooke and the All Black was more than happy to do the swap, as he did with many of his 58 Test jerseys.

“He was a very accomplished player, a real athlete and very competitive. He had the skillset and was a good guy off the pitch as well. Canada were in their early days but were a good side,” Brooke adds.

That was the first official Test match between New Zealand and Canada.

There will surely be many more tales of other Zinzan Brooke Test match jerseys.

Head to the All Blacks shop to purchase the latest All Blacks jersey HERE. 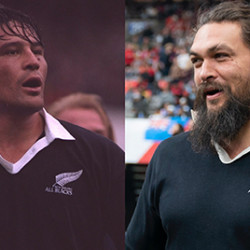