Zinzan Brooke: Hard to say if Wallabies will lift again This Test will be one of the biggest games we’ve seen at Eden Park in years.

The Bledisloe Cup is on the line and we didn’t really expect that seven days ago.

I was at the Sir John Kirwan tribute dinner at Sacred Heart College on Wednesday night and David Campese was one of the guests. He said that the All Blacks had lost some of their potency, and this was a guy who played them 29 times, so he is speaking from experience.

QUICK TAP: ALL BLACKS vs AUSTRALIA MATCH PREVIEW
But he did forewarn Wallaby fans to not underestimate the All Blacks, who will surely be better on their home turf than they were in Perth, even allowing for the Scott Barrett red card.

I was really impressed with the work of the Wallabies pack. Guys like Scott Sio and Lukhan Salakaia-Loto just won the collisions and had the upper hand at set-piece time. The backline all played well, especially Nic White at halfback. He was superb in his first Test back in ages, causing us a lot of problems on the fringes. But he was working behind a pack that was on top, and had the initiative even before the red card.

I was watching the game with some mates and after 10 minutes 54 seconds on the clock, I said I had a gut feeling they were going to lose this. It just felt like the Australians had the bit between their teeth.

I would like to think the All Blacks will bounce back in style, which they have done before at Eden Park, but I am not sure if I can recall Australia stringing together two straight displays of the highest quality for a long time. That is the variable. How well can they play again, with an almost unchanged line-up and perhaps 15 on 15 for 80 minutes?

?? KEY CLASH! How good will the match-up between Sevu Reece and Marika Koroibete be? @SkySportNZ take a close look.#NZLvAUS ?????? pic.twitter.com/vtG4RnWFrx— All Blacks (@AllBlacks) August 16, 2019

The Australians haven’t had that much rugby since June. Other than the Brumbies, no Australian team made the Super Rugby playoffs. It goes to show that you cannot judge an international by a Super Rugby book. They’ve had a longer rest period. Putting 47 points on the All Blacks would suggest they have a lot of running in those legs. They won’t score 47 points again at Eden Park but if they play anything like they did in Perth, then they are more than a chance.

Any Australian side is always brimming with confidence and. after last week, that will make them extra dangerous to overturn a 33-year hoodoo.

I am not totally convinced yet about Sevu Reece on the wing. He had a great Super Rugby season and this is a prime chance for him to show his wares, but he will be targeted by Australia. George Bridge will be fine on the other wing. He’s a proven performer for the Crusaders and safe under the high ball. Nepo Laulala, too, has a huge game ahead of him and he must do his core roles to nail his Rugby World Cup spot.

I think the All Blacks will lift but it may come down to the weather conditions. If it’s wet, it would not surprise if the All Blacks, through their pack and defensive pressure, win by 9-12. But Australia’s backs will enjoy a dry ground and the Wallabies might just win back that Bledisloe if they again get as much ball as they did in Perth. 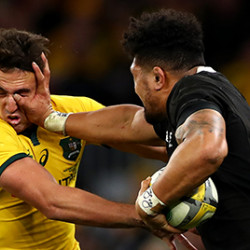