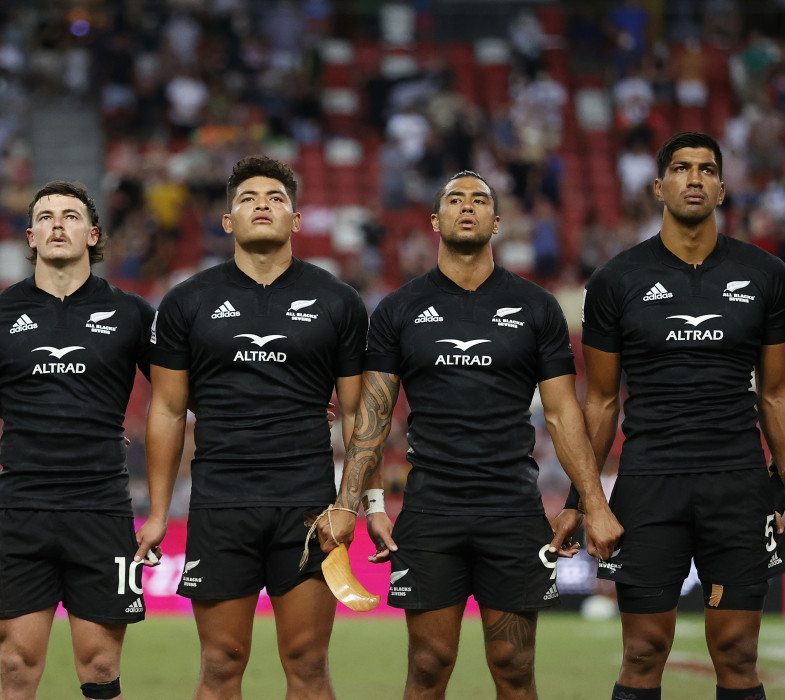 The All Blacks Sevens have been one of the most successful international sevens team in the world, competing regularly on the World Rugby Sevens World Series circuit, which the team has won 12 times.

The All Blacks Sevens have lifted the Rugby World Cup of Sevens three times, in 2001, 2013 and 2018, plus they have won four Commonwealth Games gold medals and at the Tokyo Olympics they picked up a silver medal.

The All Blacks Sevens team was first selected in 1973 and attended a major international tournament for the first time in 1983 - the famous Hong Kong Sevens.

All Blacks Sevens players have won the World Rugby Sevens Player of the Year on five occasions; Afeleke Pelenise (2007), DJ Forbes (2008), Tomasi Cama (2012) and Tim Mikkelson (2013). DJ Forbes holds the record for most appearances having appeared in 89 tournaments before retiring at the end of 2017.


Follow the All Blacks Sevens and Black Ferns Sevens:

All Blacks Sevens and Black Ferns Sevens set to return to Dubai
The sevens series will be in full swing in just a matter of days, with both the All Blacks Sevens and Black Ferns Sevens teams in action in Dubai.
Nominees announced for 2022 ASB Rugby Awards
New Zealand Rugby’s (NZR) top performers of 2022 will be recognised at the ASB Rugby Awards, with nominees announced today.

View all
Karl Te Nana on a life in Sevens | All Blacks Podcast powered by SAP
Former All Blacks Sevens speedster and current commentator Karl Te Nana joins…
Lewis Ormond back for All Blacks Sevens after five year hiatus
All Blacks Sevens head coach Clark Laidlaw talks through his squad for the Los…
Birmingham Preview with Clark Laidlaw
Clark Laidlaw looks ahead to a big couple of weeks in Birmingham.
Will Warbrick's Journey to Tokyo | NZ Men's Sevens Team
From Kawerau to Tokyo 🇯🇵 It has been an incredible journey for young Sevens…
Best off-field moments: 2020
While the rugby on show in 2020 was impressive, some of the off-field moments…
ASB Rugby Awards: 2020
Join hosts Bernadine Oliver-Kerby, Joey Wheeler & Ruby Tui as they present a…
Sevens coaches face their fears for charity
All Blacks Sevens coach Clark Laidlaw and Black Ferns Sevens co-coaches Cory…
Investec Super Rugby Isolation Nation: Episode 15
We are just one week out from the return of rugby and the start of Investec…
Investec Super Rugby Isolation Nation: Episode 9
It's that time of the week again. Investec Super Rugby Isolation Nation is…
Clarke returns to All Blacks Sevens
Two years since his last outing speedster Caleb Clarke makes his return to the…
REACTION: Double Sevens success in Hamilton
Hear from the All Blacks Sevens and Black Ferns Sevens after they both took out…
REACTION: All Blacks Sevens Day 1 Hamilton 2020
We catch up with All Blacks Sevens co-captain Tim Mikkelson after his side went…
Milestone tournament for Tomasi Cama in Hamilton
This weekend's New Zealand Sevens in Hamilton will be extra special for All…
What is your favourite holiday destination?
It's the holiday season, where is your favourite place to relax over the New…
Red Bull Ignite7 | Day Four
That's a wrap! Congratulations to all those who were part of the 2019…
Red Bull Ignite7 Day Three
Day three of #redbullignite7 gave us a visit from another elite athlete. Young…
Red Bull Ignite7 Day Two
Skills, strength, power, speed and overall fitness were the main tests at Red…
Red Bull Ignite7 Day One
What's been going on at the 2019 Red Bull Ignite7...Find out as the hunt for…
Search for sevens superstars returns with Red Bull Ignite7
New Zealand Rugby’s search for sevens superstars has once again unearthed an…
All Blacks Sevens finish season third overall
Catch all the reaction from the season-ending tournament which saw the All…