Black Ferns Head Coach Glenn Moore has named his team to play in the Women’s Rugby World Cup Final against England in Belfast.

Head Coach Glenn Moore said his team was excited and ready to play.

“A World Cup Final is what we’ve all had our sights on for a long time. Everything we’ve done in the past two years has led to this.

“We feel comfortable that we’ve done the work and we’ve selected a very good side. We also have a strong bench who will make an impact.”

Moore has made one change to the side who beat USA 45-12 in their semi-final on Tuesday (local time). Halfback Kristina Sue has been named, in a return to more traditional five forwards and three backs in the reserves.

“The team has been working hard on and off the field to make sure we have absolute clarity.

“We’ve made major improvements since the June Series and dialled it up even more during this tournament,” he said.


Around 18,000 fans are expected to turn out for the Final and among them will be a contingent of vocal New Zealand fans who have been following the Black Ferns.

“The support we’ve had from home and all around the world has been outstanding, given we are so far from home. It really lifts the players.

“You’re going to see the two best teams in the world really go at it.

“I’m excited to see our team play and I am so proud of them.”

The 2017 Women's Rugby World Cup Final will be broadcast on SKY SPORT 2.

FLASHBACK FRIDAY: We take you back to 2006 when the #BlackFerns lifted their third Rugby World Cup trophy with a 25 - 17 win over England. pic.twitter.com/O47o6a9oGF— Black Ferns (@BlackFerns) August 25, 2017 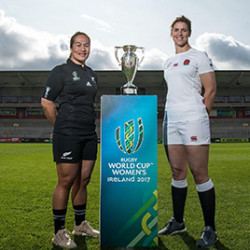