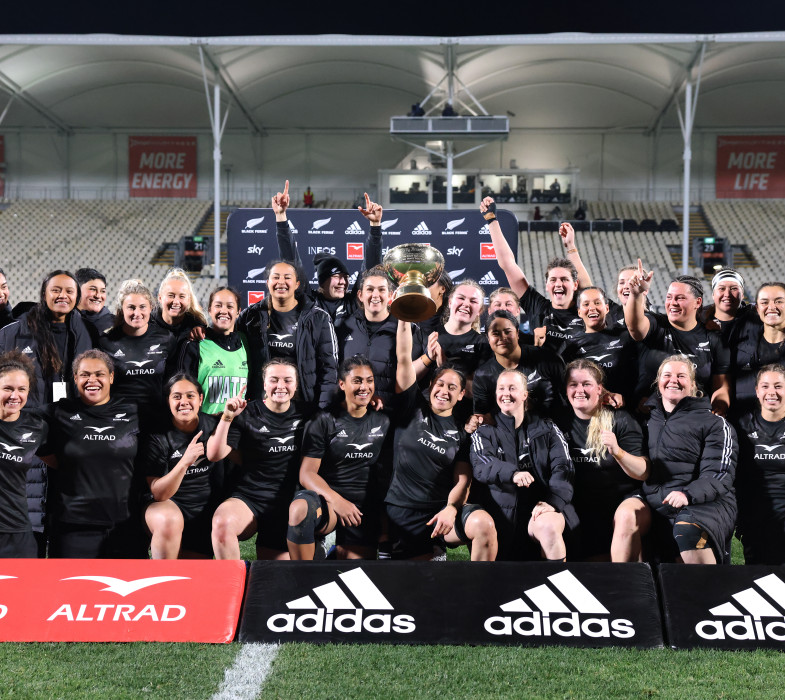 The Black Ferns are New Zealand's senior women's rugby team and the most dominant team in women's rugby with Women's Rugby World Cup titles in 1998, 2002 2006, 2010 and 2017. They have one of the best winning percentages in international rugby, with victory in close to 90 percent of their Tests.

The Black Ferns successful 2017 season was a landmark one for women’s rugby with the Black Ferns becoming the first women’s team to ever be named the World Rugby Team of the Year.

A New Zealand women's selection first took the field in 1989 and competed at the 1991 Women's Rugby World Cup.

The Black Ferns have competed in the inaugural Super Series competition in San Diego. The competition is played between the top five ranked teams in the world which includes England, Canada, France and the USA.

For all your in-depth stats and analysis Click Here

View all
Black Ferns Trophy Tour: Christchurch
The Black Ferns Trophy tour stopped by Christchurch on Monday December 12 to…
ASB Rugby Awards 2022
Catch all the action from the 2022 edition of the ASB Rugby Awards brought to…
Sky Fans Try of the Year 2022
Have your say and vote on the Sky fans try of the Year for 2022!
A letter from Portia to the next generation of Black Ferns
Portia Woodman has a message for the players of tomorrow.
Wes Clarke on the Rugby World Cup final
Assistant Coach, Wes Clarke speaks to the media ahead of the Black Ferns' Rugby…
What 'family' means to the Black Ferns
How big an influence does family have on the Black Ferns? Let the players tell…
Fitzpatrick and Holmes on the challenge of France
Theresa Fitzpatrick & Renee Holmes speak to the media ahead of their RWC…
PRESS CONFERENCE | Bremner and Demant on semifinal against France
Chelsea Bremner and co-Captain Ruahei Demant speak to the media ahead of the…
What 'sisterhood' means to the Black Ferns
The Black Ferns share their thoughts on the sisterhood they have built.
Co-Captain Kennedy Simon returns from injury for RWC debut
Kennedy Simon returns from a horror injury run that could have derailed her…
PRESS CONFERENCE | Wayne and Kennedy talk RWC 21 Quarter Final build up
Black Ferns Coach, Wayne Smith and Co-Captain, Kennedy Simon, talk about the…
PRESS CONFERENCE | Hirini and Cocksedge on RWC 21 Quarter Finals
Sarah Hirini and Kendra Cocksedge talk about the buildup towards the upcoming…
Hazel Tubic playing for the love of rugby
11 years after her Black Ferns debut and ahead of her 20th Test cap, Hazel…
PRESS CONFERENCE | Ayesha and Renee on Game 3 for RWC 21
Black Ferns Outside Backs, Ayesha Leti-I'iga and Renee Holmes discuss…
PRESS CONFERENCE | Wayne Smith on Game 2 of RWC 2021
Black Ferns Director of Rugby, Wayne Smith, discusses team naming and build up…
Podcast with Black Ferns Theresa Fitzpatrick, Ayesha Leti-l'iga and Natalie Delamere
Get the latest from the Black Ferns camp.
A Series of Firsts: First Match (Black Ferns)
Players reflect on their first match in the black jersey.
A Series of Firsts: Haka and Anthem (Black Ferns)
Singing the national anthem and performing the haka for the first time is a…
HIGHLIGHTS: Black Ferns v Japan (Eden Park)
Watch all the best bits from the Black Ferns pre-World Cup Test against Japan…
Historic first Black Ferns haka against Japan
The Black Ferns perform the haka for the first time against Japan.